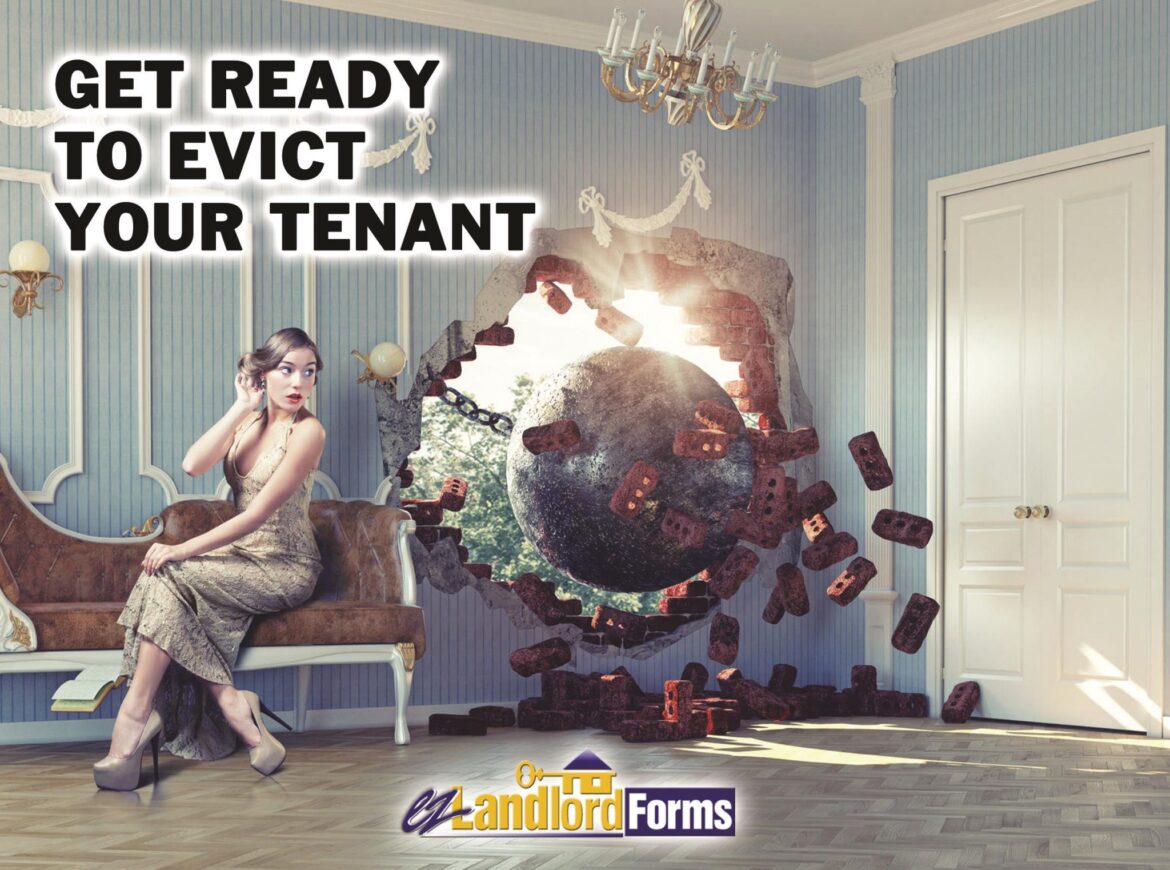 Your new tenant just moved into your rental unit. He seems like a great guy. He has a sterling credit record and great references. The security deposit and first month’s rent check came two days early.

Not only that, when you stopped by to drop off an extra set of keys, the grass was already mowed, and the house looked cleaner than when he moved in!

Well, it’s time to get an eviction plan in place.

That’s right. It is time to list the specific measures you’ll take to evict Mr. Perfect Tenant if the time comes. That’s because no matter how wonderful your tenant now seems, things can turn bad. No one wants that to happen, but, when a tenant breaks the rules, you can’t afford to lose time researching the next step.

How often is eviction necessary?

Experienced landlords know that they must be prepared to evict – even while they hope they never need to take that step to resolve lease violations. Statistics bear out this, as eviction rates in some cities may be as high as one in every 11 rental households.

Studies point to a lack of affordable housing as the primary catalyst for higher eviction rates. Tenants with high income-to-rent ratios – generally their rent is more than a third of their income – struggle to meet monthly rent. It becomes nearly impossible to catch up if they fall behind. As Pulitzer Prize-winning author Matthew Desmond notes in his extensive research on poverty, housing and eviction, “Today, the majority of poor renting families spend at least half of their income on housing costs.“

But tenants’ inability to pay rent isn’t the only cause of eviction. Rentals in unstable communities with high crime tend to experience higher eviction rates. Eviction is also the endgame when a tenant repeatedly breaks the lease by allowing unauthorized roommates to move in, repeatedly causes damages, or fails to keep up with basic maintenance like regularly removing trash.

Then, there are the true, Pacific Heights-style nightmare tenant situations that get resolved only through eviction. In that 1990 movie thriller, tenant Carter Hayes, played by Michael Keaton, never pays rent, changes the door locks on the apartment and removes every appliance and fixture before ultimately disappearing, leaving his landlords emotionally destroyed and financially diminished.

How can you prepare for an eviction?

Rather than wait for a negative situation to arise, consider how to handle lease violations in advance. Veteran landlords say that when lease rules are broken, a written notice is immediately in order. So, imagine that a violation has occurred with your rental, then write down  the steps that you take.

Here is a possible scenario of a tenant who is in the fifth month of a 12-month lease, followed by two different landlord approaches to handling problems that arise:

Six months ago, you signed a lease with a new tenant, a professional whose job transfer brought her to the city where you own rental units. Things went great at first. Then, in the third month, she paid rent late. On the fourth month, she was late again, and she moved her mother in without your permission. The fifth month came and went, and the rent still hasn’t been paid.

The landlord with no eviction plan was caught off guard by the late rent payment but just hoped that it wouldn’t happen again. When it happened the second time, the landlord asked the tenant to be on time with rent. After the tenant’s mother moved in, the landlord was very unhappy and complained to friends, but didn’t take action. When the tenant failed to pay rent in the fifth month, the landlord was left wondering what to do next. Was there a special form that should be sent? Should a lawyer be consulted? Would a court want proof of the problems that the landlord was having?

The landlord with an eviction plan sent the tenant a Demand for Rent notice and applied a late fee (as outlined in the lease) the very day that the third month’s rent was late. When the tenant was late in the fourth month, and moved her mother in, the landlord sent three notices and used a process server to deliver the notices, which required the tenant’s signature acknowledging she received the notices:

When the tenant failed to pay rent in the fifth month, the landlord went to his local court with a copy of every notice he had sent, and filed a request for an eviction hearing.

The second landlord is already ahead, because he established a record on non-compliance and has the paperwork to prove it. He knew that he could not file for eviction without giving the tenant a chance to resolve the issues. He now has a better chance of getting paid or removing the tenant for non-payment.

The first landlord sent no notices. He will have to do that before filing for eviction. He has already suffered late rent, did not receive the fifth month’s rent, and can probably expect that the sixth month’s rent will go unpaid while he establishes a record of sending proper notices.

Reduce your risk of eviction

Landlords sometimes wonder if there is anything that can be done to avoid eviction. It’s pretty hard to manage an investment property with no rental income. So, how can you improve the chances that rent will be paid, rules will be followed, and you won’t have to evict?

The answer lies in the steps you take before even writing a lease and allowing the tenant to move into your rental.

The most important step – and one that landlords sometimes skip thinking that they can simply interview an applicant – is to order a credit and criminal background check, interview prior landlords, and demand proof of income.

In “Pacific Heights,” the tenant talked the landlord into skipping the background check. He gave the landlord a few bogus, personal references, then waved a tempting payment under the landlord’s nose – six months rent paid in advance via wire transfer.

Even if you didn’t see the flick, you can probably guess that the money transfer never came. By then, it was too late, because the landlord handed over the keys and the tenant had legal possession of the apartment. Once someone is legally living in your rental property, you cannot just kick them out.

What if I never need to evict?

Maybe you will never need to put your eviction plan in action. We certainly hope you don’t. It is an unpleasant process for landlord and tenant alike. Veteran landlords typically avoid eviction when they can, and most get no pleasure from having to evict tenants.

However, even the most well-meaning landlord must consider eviction when unpaid rent impacts his or her own ability to pay the property mortgage, insurance and taxes, as well as set aside an income for himself or herself.

Since it is a very stressful process, and because the steps are deliberately complex to protect tenants from unwarranted evictions, the best approach is to prepare in advance. This doesn’t mean that you are courting trouble. Just the opposite, in fact. Writing your eviction plan ahead of time will save you from sleepless nights wondering how you will deal with unpaid rent and rule-breaking at your rental, if such a situation arises.

Video: Use a Comprehensive Lease

Why Does Eviction Take So Long?

I’ll sell my property I gave my tenant 60 day notice to move out . On October he stop to pay the rent October and November. I’m afraid if I give him 3 day notice to pay because already have 60 days not. What is the best thinks I need to do? If he don’t move out after November, what is the next step?
(Notice served by certify mail)