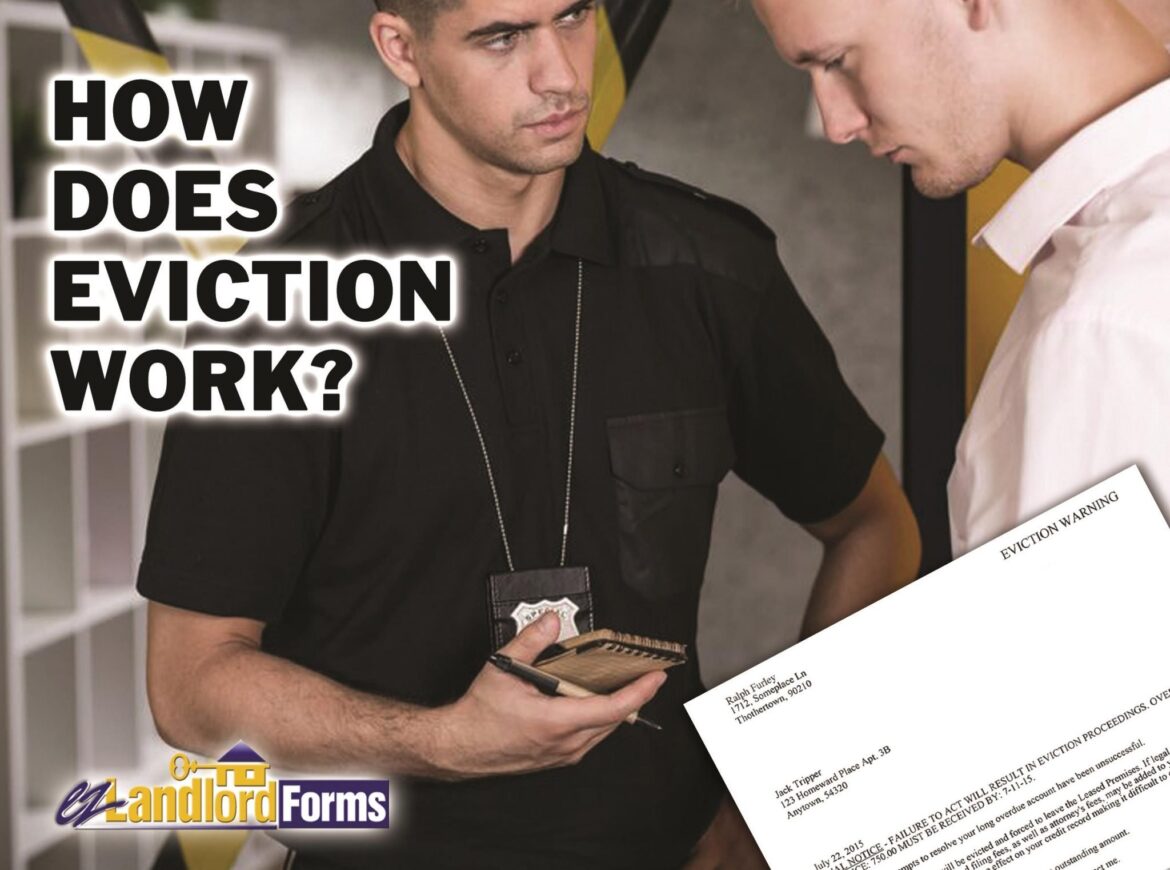 More rumors surround the subject of eviction than perhaps any other rental topic. Landlords and tenants alike seem to rely on word-of-mouth information, which seems rather inappropriate considering that the eviction process follows fixed guidelines. States and local municipalities set these guidelines, and very few are identical. One feature of virtually all eviction laws is a requirement that landlords give tenants written notices before filing eviction court cases.

This is where things get confusing. It takes more than a notice from a landlord for a situation to become an eviction case. A complaint must be filed in court for a case to be officially recorded. Even after a case is recorded, the outcome is not necessarily that a tenant will be evicted.

It’s our guess that finding accurate information is difficult because every case is slightly different, and because eviction is a subject fraught with frustration, and often anger, on both sides. Hopefully, this guide will help.

Let’s start with commonly-used eviction terms and their familiar definition. This is not an exhaustive list, and you’ll notice similar definitions are used for multiple forms. Consult an attorney for more information on specific eviction actions.

Cause – a reason that legal action is being taken.

Cease and desist – Court order directing someone to immediately stop an activity.

Complaint – Action filed with a specific court claiming legal rights against someone (tenant).

State laws are posted on websites, and many break out Landlord Tenant law in special sections.

Civil court – (Prothonotary) Setting for landlord-tenant and other non-criminal complaints.

Demand for compliance – Obey a lease term (including paying rent) or move out of the rental, or further action will be taken, likely an eviction.

Demand for possession – Move out or obey a lease term by a specific deadline.

Ejectment – Legal process to remove someone – usually not a tenant – from your property.

Eviction – Legal process to remove a tenant from your rental property.

Forcible entry and detainer – A court action that seeks to remove a tenant who has not responded to previous notices.

Lease violation notice (Notice of noncompliance) – A notice explaining which lease terms or rules were broken, and how to remedy them.

Notice of abandonment – A notice sent to a tenant whom the landlord believes has moved out of the rental, but has left behind personal property.

Notice of service (Service of process, Summons) – Formal written notice that one party gives to a second party to inform the second party that it has been named in a lawsuit; notice is accompanied by a copy of the court complaint, and delivery must follow court rules.

Notice of termination (Notice of nonrenewal) – Notice that a lease will not be renewed at the end of the lease term.

Notice to cure – Tells a tenant which lease term or rule was broken, and how to remedy it.

Notice to vacate (Notice to quit possession) – Tells tenants they must move out by a certain date, or be evicted.

Pay or quit (Pay or vacate) – Pay overdue rent by a certain date or move out.

Petition – A request to a court that a case be heard.

Summons – A court order to appear in court.

Unpaid rent notice – Reminder that rent is overdue. May include a pay or quit notice.

Unlawful detainer – Court action to remove a tenant from a landlord property.

Eviction is a process built on written notices and court filings. Notices and other written correspondence between a landlord and tenant form the critical paper trail to show cause for an eviction. The thing is, sending a notice for unpaid rent, or other lease violation, may not result in an eviction. If a tenant gets a notice, and then pays the late rent, or stops making noise that draws neighbor complaints, and or fixes other violations listed in a notice, then the issue is considered to be resolved.

If there is a pattern of rule-breaking, and repeated lease violation notices don’t resolve things, then eviction is the likely solution. Even in this case, though, if a landlord sends the tenant a pay or quit notice – or a perform or quit notice – and the tenant pays or performs, then the landlord typically cannot pursue eviction.

A landlord can usually only file an eviction complaint in a civil court when a previous notice, or notices, failed to resolve lease violations. Until then, the documentation that a tenant has broken lease terms exists only in the landlord’s personal files. This is routinely misunderstood by landlords who check court records to compile a tenant applicant’s background. Landlords must contact an applicant’s former landlords to learn whether there was unpaid rent or lease violations that did not result in eviction complaints.

Eviction records begin in the courthouse

An official court record begins the minute a landlord files an eviction complaint in civil court. Until then, there will be no public record of an eviction case against a tenant. Eviction complaints begin at the lower court level, in most states. If the case is dropped – perhaps because the tenant moved out – then no more action will be taken, but the record (with no resolution) will remain because the tenant has been named as a defendant.

If the judge rules in favor of the landlord, there typically is also a financial judgement, or a cost to the tenant for unpaid rent, fees and court costs.

Other potential outcomes in an eviction case:

Getting help with eviction

A thorough, written lease agreement – and a habit of sending lease violation notices the minute a violation occurs – can minimize the chance that you will have to evict a tenant. Yet, nearly every landlord has either confronted a possible eviction case or simply contemplated an eviction scenario. It can be a complex process and may require legal guidance from an attorney knowledgeable in your area’s landlord tenant law.

Preparation is critically important, as New York City Civil Court judge, the Hon. Margaret Cammer, noted in her helpful guide, published in 2006. Although every court may handle the hearing process a little differently, Judge Cammer’s advice on how a trial is conducted and acceptable behavior in a courtroom takes away some of the mystery and reduces apprehension about the experience.

Eviction is an unfortunate part of managing investment property, but it doesn’t have to be overwhelming, and it doesn’t have to be a guessing game. State laws are posted on websites, and many break out Landlord Tenant law in special sections. Also, local court staff can provide complaint forms, guidelines for completing them, and general information on the local court process.

What Is the Time Frame for an Eviction?

Eviction procedures can be costly and take weeks to complete. The time it takes to complete an eviction varies depending on your state’s laws, the specific eviction case, and other factors, but usually speaking, it takes three to four weeks.

How much money do you need for eviction?

Evicting a tenant entails a number of expenses, such as legal bills, court fees, lost rent, turnover fees, and property damage. It costs about $3,500 to break a lease.

If a renter ignores an eviction notice, what happens?

Landlords must request a possession order from the court in order to be able to evict renters and take ownership of the property if tenants don’t vacate at the end of the notice period.

Why Does Eviction Take So Long?