Will Swag Bring You Better Tenants? 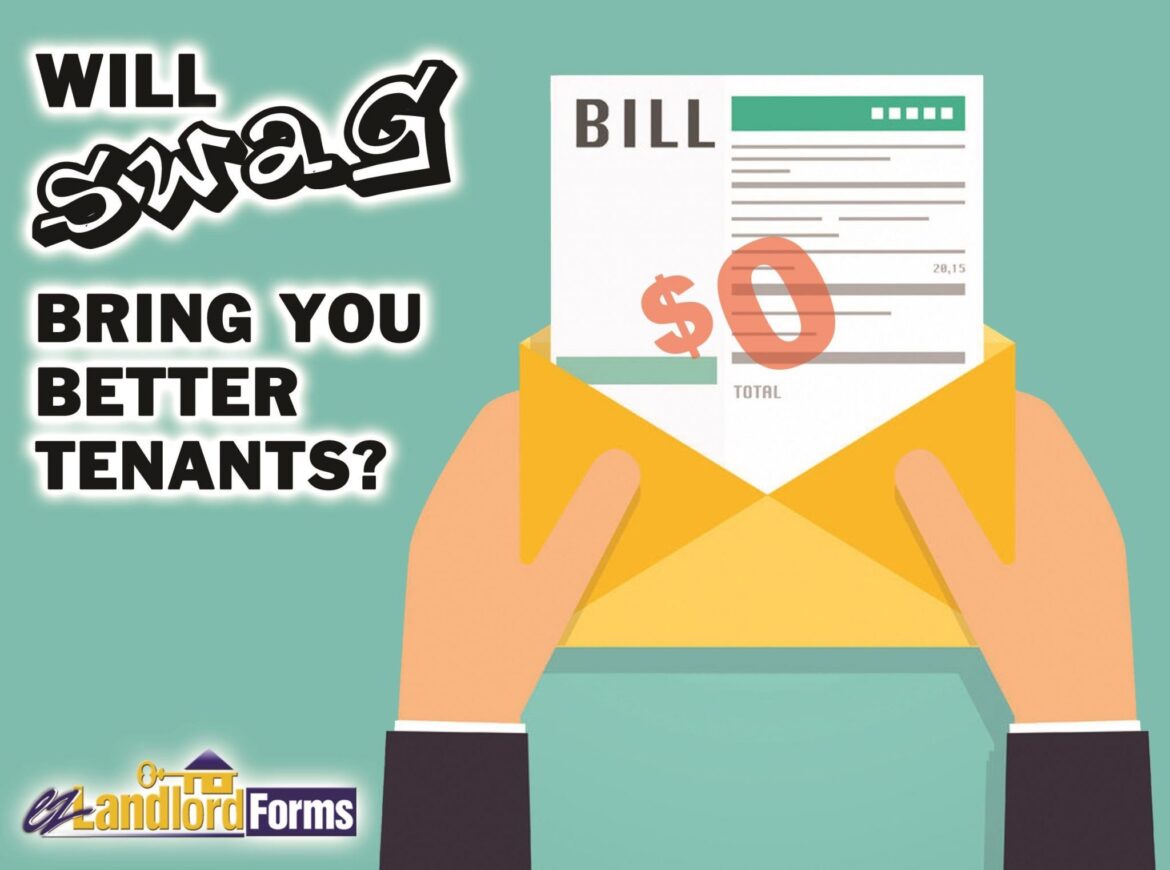 Competition for college-student tenants is so fierce in some communities that landlords and property managers have perfected the practice of offering “lease swag,” or perquisites for students who sign rental leases.

From offers of a free month's rent, to gifts like flat-screen TVs, to free shuttle rides to campus, swag is limited only by a landlord's creativity. A landlord in one small Pennsylvania town that hosts a state university offers Beats wireless headphones – worth $500 – to all students who sign a lease agreement 18 months in advance of moving in.

It isn’t only landlords in college towns who offer perks. The practice is common in some big cities, and is an option for any landlord.

Do those perks get better tenants? And how do landlords decide what to offer?

Who offers perks and how do they advertise them?

Some landlords have always offered perks to guarantee that their rental units will be filled by a certain date. They want to limit vacancies, and want to be able to count on rental income.

For others, though, offering perks is a way to draw more applicants in a market temporarily crowded with comparable rentals, or a solution to filling a higher-than-usual number of vacancies.

While investment property appears to be continuing its strong showing since the 2008 recession, there is decreasing competition for rentals in some communities. Perks are especially more likely in cities with a surge in new rental construction.

Landlords in college towns offer swag to rise above the glut of offerings, and to attract sincere applicants willing to plunk down deposits. Perks typically are mentioned upfront in order to grab the attention of those busy young adults. Often, agents follow up, calling and emailing student applicants to ask if they have made a housing decision, and reminding students of the swag that awaits them, should they sign a lease.

One very common approach to offering incentives for signing a lease within a certain timeframe is a free month in the rental. The special deal is described in listings to boost initial interest, then added to agreements at lease signing. Other perks include reduced rent over the term of a lease, added amenities at no extra charge, such as free parking for part or all of a lease term, and waived fees. Renovations are commonly offered as perks in retail and commercial rentals.

Landlords may not mention perks with the listing, but will offer them if a prospective tenant is waffling on committing to a lease. Tenants themselves may ask for perks, such as a bigger apartment for the same rate as a smaller unit or a waived pet fee.

Some professional property managers argue that giving concessions hurts a property’s reputation. They say that a property will be seen as less appealing in a competitive market if the landlord is known to offer perks. Yet, most seem to believe that perks have their place when the landlord needs to nudge his rental ahead of the pack.

Any benefit that will be given during a tenant’s stay should be explained in the lease. For instance, if a month of free rent is offered, the lease must make it clear that rent payments will be due the second and remaining months of the term. If the pet fee was waived as an incentive, explain in the lease that a pet fee may be reinstated when the lease is renewed. (The landlord always has the option to waive the pet fee in subsequent terms as in incentive to retain a good tenant.)

Don’t promise perks you can’t deliver. For example, don’t offer off-street parking in a lot that you don’t own. Don’t promise satellite TV or wireless internet, then stop paying the bill. Landlords also shouldn’t try to recoup the cost of the free month or free amenities by boosting other fees. Tenants will resent it, and may be able to break the lease.

Keep track of receipts for the little swag you buy to advertise your rentals, items such as pens, magnets, water bottles and the like. Those expenses can be deducted at tax time.

Also, record rent amounts and amenities that you are giving so you can determine what any perks are costing you at the end of the year. You can’t deduct free month’s rent as a loss, but then again, you won’t pay taxes on rental income you didn’t receive.

It’s also a good idea to limit perks to those times when you really need an edge over competitors. In situations such as an unexpected vacancy, or a vacancy in a slow season, a little swag can be just the thing to get your rental extra attention from tenants in the market.

Will the Trend With Short-Term Leases Last?