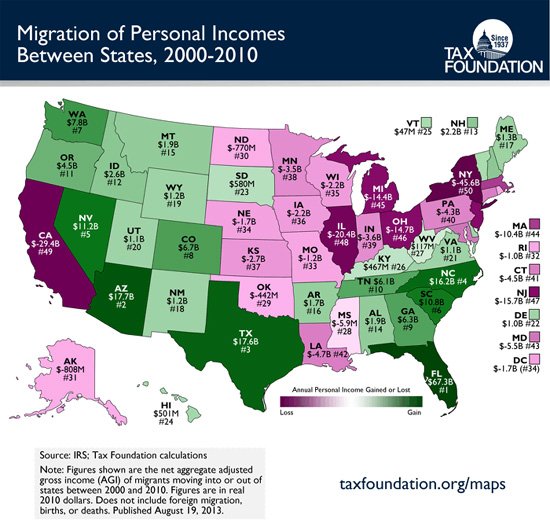 To be clear, it is not legal for states to charge a true exit tax on citizens changing their residency from one state to another (this is not the case for the federal government, which does charge a large exit tax to some people abandoning their U.S. citizenship for a tax-friendlier one).

So what do high-tax states do, to try and prevent their residents from moving their legal residence to low- or no-tax states?  In a word, they audit them.

Every year, some state or another raises taxes (last year it was California and Maryland), and these taxes are not just on the wealthy.  A barista and aspiring real estate investor in San Francisco earning $47,500/year (a well-below average income in Frisco) is in California’s 9.3% income tax bracket (which does not include the 1.5% payroll tax collected by the City of San Francisco), on top of federal income taxes, FICA taxes, capital gains, etc.  Compare that to equally-hip Austin’s 0% income tax, and that means thousands of dollars relinquished each year even for modest earners like our nascent real estate investor.

As this tax differential rises, more people consider changing their legal residence elsewhere, whether by moving, having a second residence, or simply changing their mailing address to their parent’s house in Florida.  (In some cases, ex-pats and nomadic RVers and boaters can even use private mailbox services to establish residency in the state of their choices, such as income-tax-free Florida or Nevada.)  But high-tax states won’t let you go quietly, especially if you earn more than average.

Minnesota raised income taxes in 2013, but what was especially telling was Governor Mark Dayton’s push for a “snowbird tax” on anyone spending at least 60 days each year in Minnesota (rather than simply spending more than half the year there).  The idea was that anyone visiting Minnesota for more than two months in the year would have to file and pay income taxes as if they were a resident, on top of their home state’s income taxes.  Governor Scott Walker of neighboring Wisconsin offered a friendly wink to Minnesotans, tweeting “Come to Wisconsin (it’s beautiful and less taxing than Minnesota).”

David Scott Sloan, a partner at Boston law firm Holland & Knight LLP who advises clients on tax strategies, says that families filing a change in residency or a partial-year return often trigger the state initiating one of these exit tax audits: “That typically puts the first red flag up.”  The audit and appeal process often takes years of battling with state tax collectors.

States have discovered that they can use automated programs to track citizens’ locations and spot people who spend long periods within their borders, utilizing data from credit card transactions, E-ZPass (electronic toll collection) records, and IRS records.  If that sounds like George Orwell’s Big Brother, watching citizens’ comings and goings, well… the privacy nerds may be onto something when they say “Just because you’re paranoid doesn’t mean they’re not out to get you.”

Massachusetts has used these automated tracking programs to more than double its audits last year, to 45,887 total audits.

Nor are auditing the only weapon available to these higher-tax states.  States such as Maryland are withholding a portion of real estate proceeds from out-of-state residents, to ensure sellers pay capital gains tax to Maryland on top of the seller’s home state and the federal government.  If the non-resident seller files a Maryland tax return, and if they owe less than the 7-8.25% collected (in Maryland’s case), and if they file a specific form with the Maryland Department of Assessments and Taxation, then the seller may receive some of the money back.  Aside from deterring out-of-state real estate investors, Maryland perhaps hopes this hard-line stance will deter residents from leaving, as any unsold real estate will suddenly create a higher tax burden.

So are taxpayers actually migrating from high-tax states to low- or no-tax states?  A recent study published by a non-partisan research organization, the Tax Foundation, shows a map of state income changes between 2000-2010.  In stark relief, it demonstrates taxpayers fleeing high-tax states for lower-tax states, with states like California and New York dramatically losing taxpayers to states like Florida and Texas.

So what does this mean for high-tax states?  In short, it leaves them two options: they can either lower tax rates to stop the bleeding and more competitively court migrating workers and entrepreneurs, or they can scare up more revenue, through higher tax rates and more aggressive exit tax audits, fees, and fines.

Thus far, it seems these states are opting for more aggressive tax collection, which means real estate investors considering a strategic move may want to act sooner rather than later.  The more desperate states grow for revenue, and the more an individual earns, the greater the chances of an audit become.  (See a checklist for minimizing audit probability when changing state residence here).

Do Looks Matter in Real Estate Transactions? Apparently Yes – By a Lot

Thanks for informative post about tax for each state. I am living in Minnesota, and I got such info from this post.