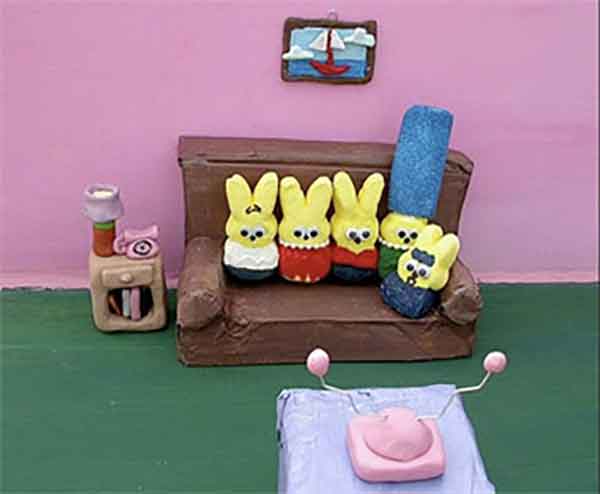 In Boulder, Colorado, 60 year-old Carol Burdick decorated her apartment door for Easter, using plastic grass, stickers and a self-erected four foot tall pyramid of colorful Peeps (yes, the bird-shaped marshmallow Easter candy).  The landlord requested that Burdick remove the tower of Peeps because they blocked a common area, violating the terms of her lease agreement.  After Burdick refused to remove the marshmallow structure, her landlord removed them himself and Burdick responded by refusing to pay rent, claiming her right to decorations was a Constitutional issue.  The management company promptly evicted her and countersued for two months rent and legal fees.  After the judge heard testimony from both sides (including an expert witness admitted to testify as a “Peeps expert”), the court eventually ruled that Carol Burdick owed the landlord a total of $1,132.66.

If Peeps caused tempers to flare among the Boulder landlord and neighbors, they would have been apoplectic over Gavin Townroe and his penchant to blast “Viva Forever” by the Spice Girls.  Repeatedly.  In the middle of the night.  The Nottingham, England man's neighbors reported they were forced to leave their homes to avoid the monstrous song blaring on repeat.  “Friday, Saturday, you don't mind, but seven days a week is very difficult to deal with,"  lamented one sleep-deprived neighbor who complained repeatedly to the property manager.  Britain’s Daily Mail reported that one of Gavin’s neighbors had to take sick leave from work due to lack of sleep.

Townroe received an anti-social behavior order by Nottingham police, and in October of last year, Townroe was given a six-week suspended jail term after breaching the order.  This past month the Nottingham City Council finally evicted Townroe from his home and he was slapped with a 913 pound fine (roughly $1,500).

While forced repeated Spice Girls tunes at 3 AM does sound like something the CIA would do to interrogate detainees, neighbors in Portage County, Wisconsin argue they had it even worse.  Instead of Guantanamo Bay circa 2005, think George Orwell's 1984.

Some women may prefer jewelry or flowers as gifts, but a woman in Plover, Wisconsin was given a rat – and was ecstatic.  The rat multiplied and before long, Darlene Flatoff had hundreds of the creatures inhabiting her mobile home, earning a title as the world's first "crazy rat lady."

"You could see them in the windows, that's how many there were," Park Manager Miguel Lopeez said.  "The smell was just unbearable."  If the stench and the infestation were not bad enough, an exterminator reported that the rats had chewed through the floor boards of the home and authorities estimated there were approximately 300 rats living in the property before the landlord intervened.  The tenant, however, claimed that the rats were her "friends" and did not cause any harm.

The infestation was reported and park managers warned the woman several times before beginning the eviction process.  Flatoff has since been evicted but her furry friends were not as easily removed, leaving exterminator Matthew Schneider with the joy of trying to evict the four-legged tenants.

What Happens When Homes Cost More to Demolish than They Are Worth?

How to Let Go of Bad Tenants

Is the Interest Rate Going Up?

A Guide to Increasing Rent on Current Tenants

Should You Invest in a Rental Property Right...