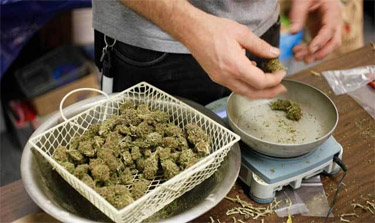 A Washington landlord launched a legal furor last week when it sent notices to tenants in all 171 rental units, banning all marijuana use in the Mercer Island apartment complex and pushing tenants to sign a lease amendment to this effect.  Washington was among the first states in the nation to legalize recreational marijuana use, a law that went into effect on January 1, 2013 (Initiative 502).

Aside from banning all types of marijuana use, the tenant notice further demanded that all residents report other tenants’ use of marijuana to the management company, Abode Management.  The notice threatened eviction of any tenants caught using marijuana on the apartment community’s grounds.

The policy stands on extremely spongy legal ground.  The first legal question arises because federal laws still classify marijuana as an illegal drug, which is in direct conflict with the Washington law declaring recreational uses legal.  This contradiction remains untested in the court system.

Then there is the question of medical marijuana, which has a longer (and more distinguished) history, which many patients and doctors contend is a separate legal right.  At least one tenant in the complex, Iraq war veteran Alex Aversano, has a prescription and uses liquid forms of medical marijuana, and has objected vocally to the new policy, and has refused to sign the lease amendment.

Aversano’s particular usage raises yet another question: what are the legal differences between banning smoking and banning other forms of marijuana?  Washington laws are clear that landlords can ban smoking (which would include smoking marijuana) on the leased premises.  But other types of usage – liquid, edible or vaporized consumption – would not be covered under this allowed restriction.

Which, in turn, raises more questions: how would the landlord police tenants using non-smoked marijuana?  Would they show up for inspections and taste all the tenants’ brownies, or check every liquid they found in the apartment?  The requirement that tenants tattle-tale on their neighbors was one of the most vocally-rejected aspects of the notice that Abode Management sent last week.

And then there is the untested question of enforcement, even if the landlord did catch the tenant green-handed.  No Washington landlords have yet tried to evict tenants for the recreational use of marijuana, so the courts have yet to rule on the matter.

One possible outcome, as these legal questions untangle and become clearer in the coming months, is that apartment communities and rental properties will simply begin to market themselves as being “pot-friendly” or pot-restrictive, just as rental properties are pet-friendly or not.  Some people do not want to be anywhere near pets (or pot), and others do; but the beauty of markets is that there is room for diverse services and amenities, and savvy landlords will see money to be made or lost as supply and demand ebb and flow.

Tomorrow’s Trends in Housing – What Amenities Will the Next Tenant Look for When Renting?

Capitalization Rates Demystified: How & Why to Calculate Cap Rates

What the Growing Trend Towards Rent Control Means...

What You Need To Know About California’s New...

The History and Impact of Rent Control Legislation...

Can I Add That Clause to My lease?