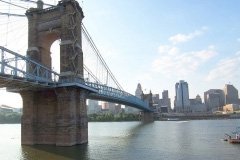 The city of Covington, Kentucky is providing landlords with a new and simple way to screen tenants.  In the upcoming weeks, the city will offer an alphabetized list of people who have been evicted in Boone, Kenton, and Campbell Counties over the last three years.  The list will be available on the city’s website.

The idea came from meetings held last year between the city of Covington and property owners about the city’s rental inspection regulations.  Mayor Sherry Carran explained “Many of the landlords we spoke with said that some of the problems with rental properties are not necessarily the fault of landlords but from problem tenants.  Having a Northern Kentucky eviction list will hopefully help landlords who want their rental properties to contribute to the well-being of our neighborhoods.”

A similar system is already in practice in Hamilton County which provides landlords with a search-by-name or case link to the clerk of courts.

The Brighton Center, which is an agency located in Northern Kentucky focused on helping under-privileged residents, hopes that landlords will utilize this new tool wisely and consider the circumstances causing people to be faced with eviction.  In the struggling economy, the agency has received numerous first-time service requests from people in the Northern Kentucky area who are having difficulty making ends meet.  The center receives close to 100 requests for help each month.

Charles Tassell, who is the Director of Public Affairs for the Greater Cincinnati and Northern Kentucky Apartment Association, said landlords are most concerned about people who are repeatedly evicted.  “Many of them, as soon as the eviction is filed, they’ll move out and move somewhere two to three miles away.”  The Covington website will help screen for that type of tenant, which is particularly useful as many landlords have neither the time nor resources to travel to several courthouses to check on evictions.

Manager of City Services Mike Yeager explained that an employee has been working on the system since November and hopes to have the site up and running in late spring or early summer.  It will be updated continually, and other useful landlord information, including links to landlord training sessions, will also be available on the site.

Renting vs. Owning: At What Point Does a Real Estate Investment Make Sense?